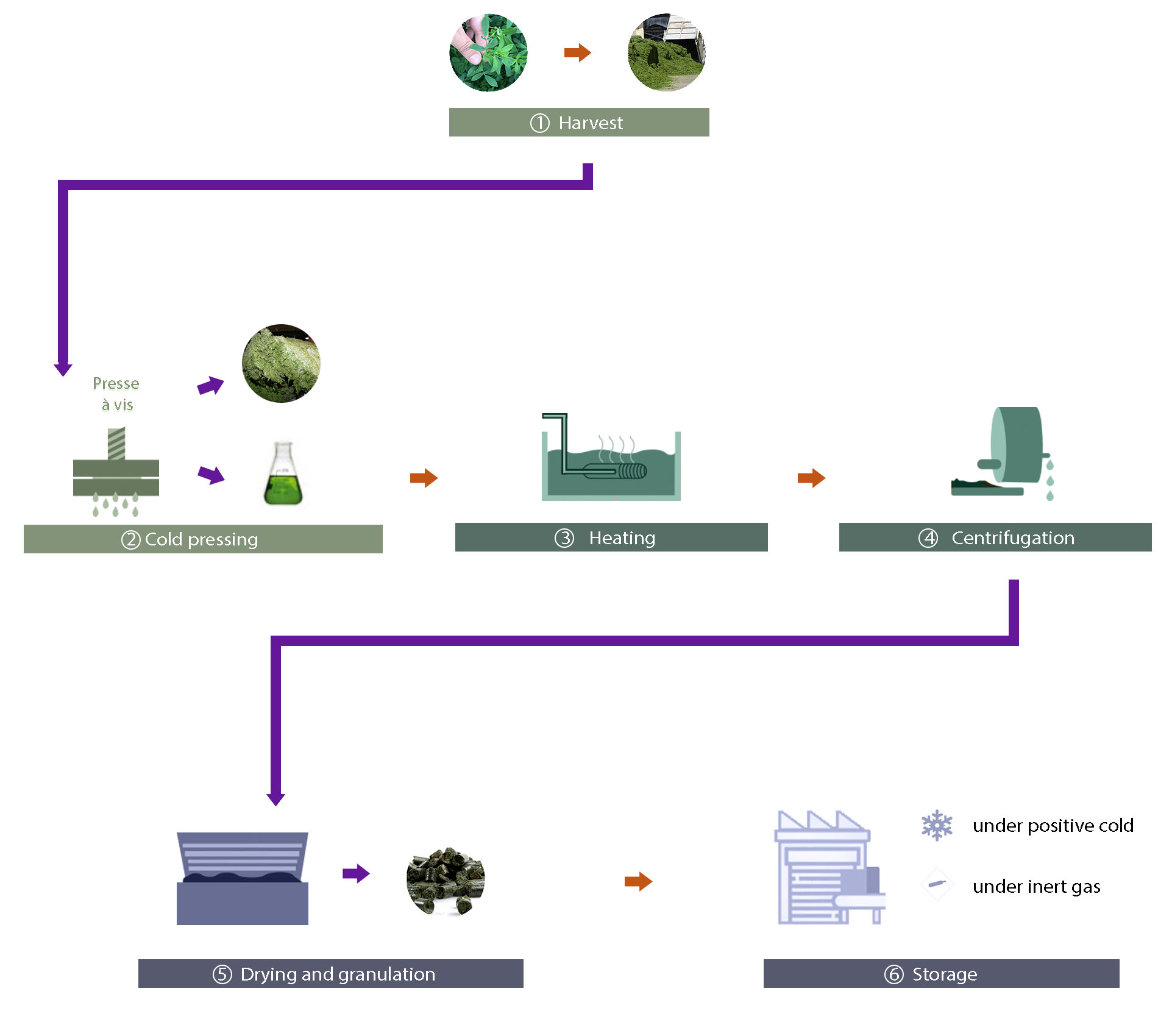 From plant to concentrated alfalfa extracts

Alfalfa naturally rich in proteins, cultivated in North-Eastern France, is used to supply our extraction tools.

The process consists of a sequence of physical stages, which preserve the plant's intrinsic qualities as far as possible. Results: a healthy, natural product, which meets the new health quality requirements.

During the process, the product is not, at any time, in contact with synthetic solvent to facilitate extraction or increase pigment concentration.

Respecting the harvest timetable is a fundamental part of quality.

It is drawn up to optimise transformation of the plant according to its vegetative stage. For better quality dehydrated products, we undertake to respect the cutting timetable for each raw material. To obtain the most suitable plant for manufacture of our various commercial qualities. 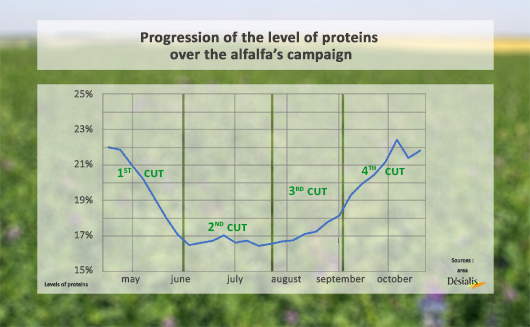 A process which consists of natural drying to lower the average humidity level of the alfalfa before dehydration, without altering its nutritional qualities.

The alfalfa is harvested in several successive cuts, from May to October. It is immediately transported to the factory, where the plant material is fragmented to release its constituents. It is then pressed to produce a green juice, rich in protein and pigments.

The juice is heated to coagulate the protein. Preheating followed by an injection of steam flocculates most of the protein present, which forms a proteinaceous coagulum.

This is all centrifuged to separate the coagulum from the liquid part.

The pigments (lipidic) in the juice are carried along with the paste obtained from the protein coagulum.

This paste is dried on a fluidised bed and granulated at sufficiently low temperatures to preserve the CAE composition.

Cooling takes place on leaving the dryer to stabilise the product.

Since the CAE is produced within six months of the alfalfa harvest, it can be stored for one year at specialist storage sites. This stage is subject to more attentive treatment to guarantee perfect preservation of the CAE properties, thus meeting customers' requirements.

Carotenes and xanthophylls are sensitive to oxidation

Rich in double carbon-carbon bonds, carotenes and xanthophylls are particularly sensitive to oxidation.

This oxidation reaction is initiated and maintained by light, heat and oxygen in the air. During the initiation phase, the reaction is slow, then it intensifies exponentially: this is an autocatalytic reaction.

To slow these degradation reactions as much as possible, the storage techniques use three effective levers:

Darkness: once produced, CAE pigments are no longer exposed to UV from light, from the storage cell to final packaging.

Aerobic micro: CAE is stored in cells with a modified atmosphere. Continuous nitrogen inerting controls and minimises the quantity of oxygen in contact with the pigments.

Storage in inert gas (nitrogen), has been used for many years and is specially designed to preserve all the nutritional values in CAE. This system leads to 70% retention of xanthophylls. Depending on the factory production rate, the product is placed under nitrogen after manufacture.

These processes guarantee the level of Total Xanthophylls (or Lutein-Zeaxanthin).

By continuing your navigation, you accept the use of cookies or similar technologies for statistical and navigation purposes. Learn more.

You have declined cookies. This decision can be reversed.